The 8th World Instant Noodles Summit was held in Tianjin, China on May 19–21. This biennial convention by the World Instant Noodles Association (WINA) is the biggest event in the instant noodle industry. This time, the host was Tingyi (Cayman Islands) Holding Corporation. Under the theme of "Instant Noodles for Better Life, a total of 86 member companies/organizations from 16 different countries/regions participated, and the summit was attended by some 600 people, including invited guests, the media, and associates of the host.

●Board of Governors Meeting

Board of Governors Meeting

Day One started with the board of governors' meeting – the decision-making body of WINA. This is literally "the summit" at which the top executives of the world's leading instant noodle manufacturers gather. The board affirmed Tingyi's proposal to increase the number of governors in an effort to ensure food safety in the largest market of China. As a result, Jinmailang Food and Baixiang Food were added as governors, bringing the number of board members up to 13.

The board also decided to inject US$500,000 into the WINA Disaster Relief Fund, which started with a donation from Momofuku Ando, the first chairman of WINA. The amount consists of a donation of US$200,000 from Tingyi and US$100,000 from Nissin Foods, with the remaining US$200,000 from the WINA general account. Furthermore, the board decided to call for donations from other governors and members.

Following the board of governors' meeting was the general meeting attended by regular members (instant noodle manufacturers). Some 30 VIPs from the Chinese government and the Tianjin city government, including a vice minister and a vice mayor, were present at the opening ceremony, showing how deeply they were interested in the summit. In his opening address, Mr. Koki Ando, WINA chairman, pointed out the increasingly significant role of instant noodles in the age of an exploding population. In addition, with respect to food safety, he emphasized that scientific risk appraisal shall be made before recalling and disposing of products. Mr. Ando also summarized the environment surrounding the instant noodle industry for the past two years since the KL summit. Global demand for instant noodles in 2011 (98.2 billion servings) was also announced.

The position of WINA director general was succeeded from Mr. Peter Vogt, managing director of Nestle Products Sdn Bhd, to Mr. Wei Ingchou, chairman of Tingyi (Cayman Islands) Holding Corporation. It was announced that Mr. Wei, the new director general, would assume the position for the coming two years.

By order of the director general, the WINA secretariat presented both an activity report and an accounting report.

The governors made a short presentation on their respective market, in alphabetical order by the name of country/region

One of the main attractions of the World Instant Noodles Summit is the showing of TV commercials from around the world. A total of 17 commercials were shown. Those TV commercials were evaluated by renowned ad-professionals, namely Mr. Shigeo Okazaki, Executive Brand Consultant, Beijing Dentsu Advertising, Mr. Peter Soh, former chief creative officer of Saatchi & Saatchi, and Mr. Philip Shen, general manager of Beijing Interface Communication, jury member of International Advertising Festival at Cannes.

Announcement of the next host

The WINA chairman and director general jointly announced that Acecook Vietnam Joint Stock Company would be the host of the next World Instant Noodles Summit. Mr. Kajiwara (general director) and Mr. Tri (deputy general director) stepped up on stage and expressed the company's commitment to bring the 2014 summit in Ho Chi Minh City to a great success.

A welcome dinner was held at an open-air site near the hotel, where the guests enjoyed plenty of song and dance from around the world. At the booths on the lawn, Chinese noodle-making masters representing various regions of China crafted their culinary masterpieces. The dinner was highlighted with fireworks at the end of the party. The 17-minute-long spectacular fireworks colored the night sky.

On Day Two, some 600 people including those from instant noodle manufacturers, associate members (suppliers), guests of the host, and the media, attended the forum. Among the guests of honor was Ambassador Niwa (Japan's ambassador to China). Touching upon the history of instant noodles, he spoke about Momofuku Ando, the first chairman of WINA, and his philosophy, that "Peace will come to the world when there is enough food for everyone."Another guest of honor was Mr. Liming Wang, director, Ministry of Industry and Information Technology, China. Mr. Wang made a short presentation using a projector and covered the history of processed food in China.
Five lecturers presented their proposals for the future of instant noodles, from their own respective professional fields.

A total of 13 governors representing 11 countries/regions sat together at the joint press conference to wrap up the summit.

The exhibition booths of member companies were set up for the first two days. Many different types of instant noodles from around the world were on display.

The gala dinner was a truly delightful event, fitting for the finale of the summit, and it was paired with various forms of entertainment, including a "multi-armed deity performance." The winning entries of the TV commercial film festival of Day One were also awarded. Mr. Koki Ando (WINA chairman) and Mr. Ingchou Wei (the host) expressed their thanks to conclude the event.

The highlight of the optional programs was the viewing of Tingyi's production plants. Tingyi's modern factory was opened for the summit attendees, who came from many different countries.

※The title is that of the time.

The 8th World Instant Noodle Summit was held in Tianjin, China. Instant noodle manufacturers and related companies from around the world gathered to discuss the theme of "Instant Noodles for Better Life," and reaffirmed the mission of instant noodles.

Instant noodles have always played an important role in times of crisis. Here in China, after the 2008 Sichuan Earthquake and the 2010 Qinghai Earthquake, the World Instant Noodles Association (WINA), with the cooperation of its member companies, extended aid with large amounts of instant noodles. In other countries, instant noodles demonstrated its power in the wake of the catastrophes brought on by last year's Tohoku earthquake in Japan, the flood in Thailand, and the typhoon in the Philippines. To the victims of disaster, regardless of nationality, a hot bowl of instant noodles affords a sense of relief. This is what sets instant noodles apart from other emergency foods that just fill the stomach, it is the unique value of instant noodles. Thus, we have resolved to further our aid through instant noodles, and to this effect we have decided to instantly inject 500,000 US dollars to the WINA Disaster Relief Fund and call for the donation from Governors and member companies.

The role of instant noodles is not limited to times of crises. Last year, the world population surpassed 7 billion. It is predicted that this population will reach 10 billion by 2050. With warning cries for an impending food crisis, the annual consumption of instant noodles has reached 98.2 billion units, and instant noodles are expected to fulfill a very important role. This is because instant noodles is a food that fulfills all 5 criteria: tasty and nutritious, convenient, safe and hygienic, storable for long-term, and reasonably priced.

Particularly with regard to food safety, we the instant noodle industry have strived our utmost. We are determined to maintain this stance. We recognize that fair competition between companies is imperative in that it increases the choices available to the consumer. At the same time, we affirm that, in order to protect the consumer, information regarding food safety and environmental protection should be regarded as a non-competitive sector, and should be actively shared among members of the industry using WINA as a base. Of recent, there have been numerous incidents threatening our food safety. We will not relent in our efforts to eliminate dangerous materials. However, we issue caution against trends that seek recall or destroy all products on the market even when the levels are such that no effect on the human body can be seen. The human body has tolerable intake levels, and to make judgments using a standard of just positive or negative lacks reason. Not only this, it may even lead to a waste of resources and deterioration of the global environment. We ask that the media and consumers base their actions on standards which have scientific basis, such as Tolerable Daily Intake.

We pledge to continue to further the cause of food safety. Based on our belief that serving quality goods means serving the society, we declare here from Tianjin, China, the city of food, that we will continue to contribute to society through instant noodles.

Distinguished scientist, Council of Scientific & Industrial Research (CSIR) / President, the Nutrition Society of India / Chairman of the Panel on the Food Safety and Standards Authority of India

Touching upon the features of instant noodles, Dr. Prakash pointed out the potential of these products, on the grounds that canned/bottled beverages, which are currently sold in the billions, were never a culture in any country. He then talked about food safety and technological innovation as the prerequisites for market growth. Moreover, he suggested the development of noodles with nutraceuticals for further added value.

"The Eater of Tomorrow: What Slow Food, Locavores, and Climate Change Mean for the Instant Noodles Industry"

With a global population of 7 billion, along with soaring food prices resulting from abnormal weather and commodity speculation, how to feed ourselves is a grave concern. Under these emerging factors, the instant noodle industry is expected to respond to ensure long-term dietary, ecological, and economic stability. Adapting to price changes, educating customers, reducing waste, and engaging young shoppers are the keys to success, he states.

"Overview of Food Safety in China"

Vice President, Chinese Institute of Food Science and Technology / Co-Chair of the International Expert Panel on Food Safety of IUFoST

This expert in food safety in China described the country's system of food safety management.

Dr. Yamada explained the basic concepts of the food safety assessment index, such as the ADI (acceptable daily intake), TDI (tolerable daily intake), and MOE (margin of exposure). He then elaborated on recent food safety concerns regarding specific issues: the issue of radiation in food (which arose in the wake of the nuclear accident in Fukushima) and the turmoil over DEHP (diethylhexyl phthalate) contamination.

"China Delicacy and Myself"

Based on the thorough research of various food cultures in China, Tingyi strived to integrate such cultures into its instant noodle products. The presentation was paired with skillful performances of noodle making, which caught the eyes of the audience.

※The title is that of the time. 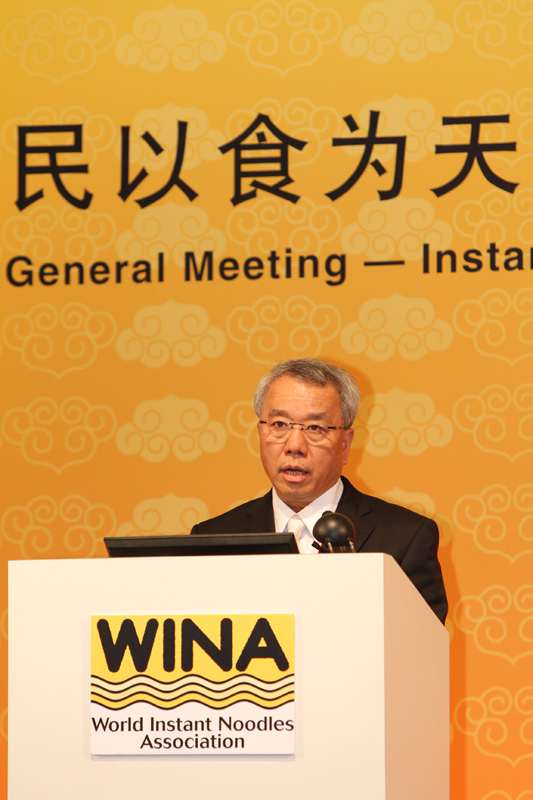 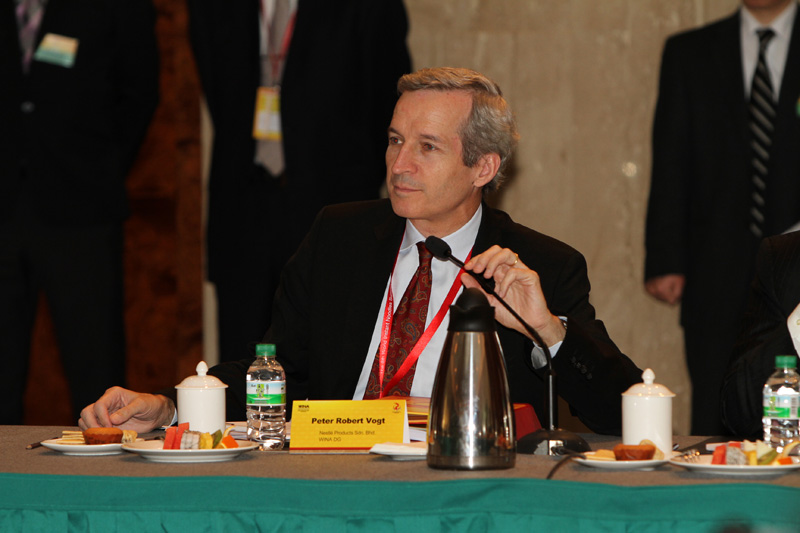 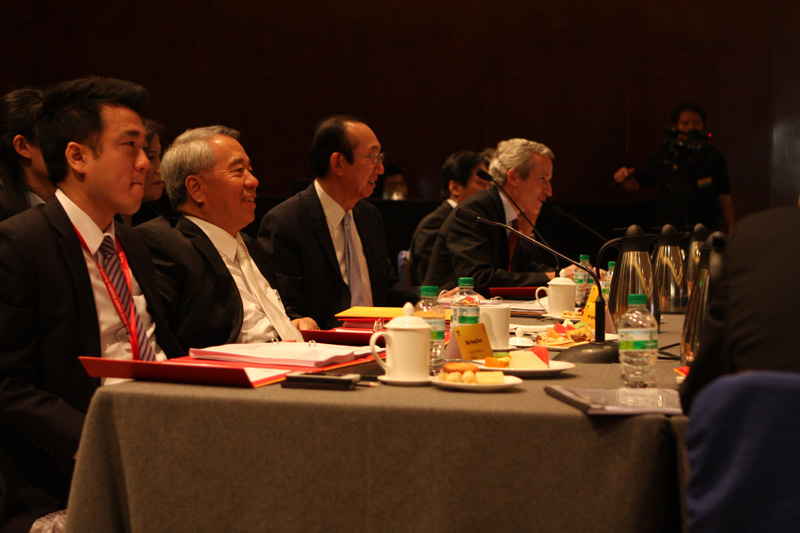 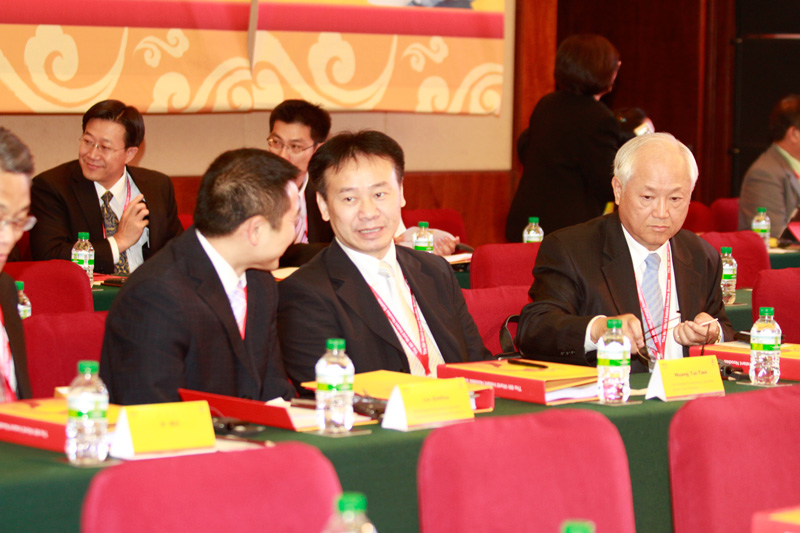 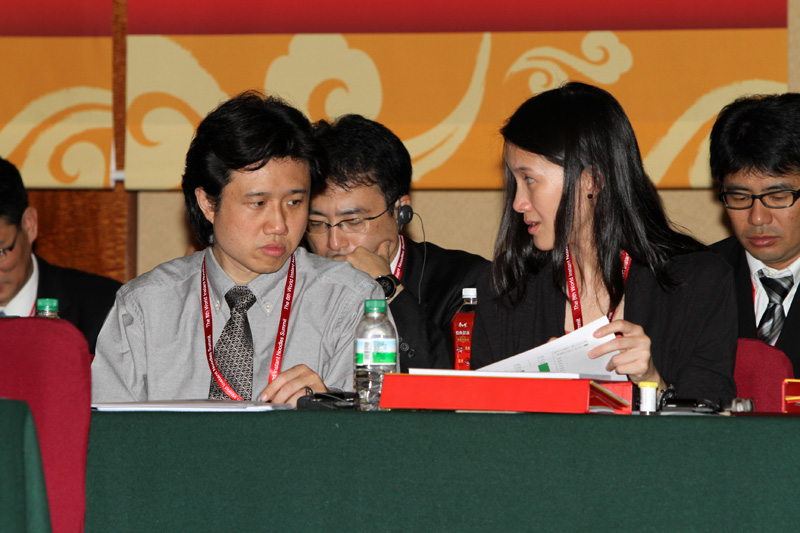 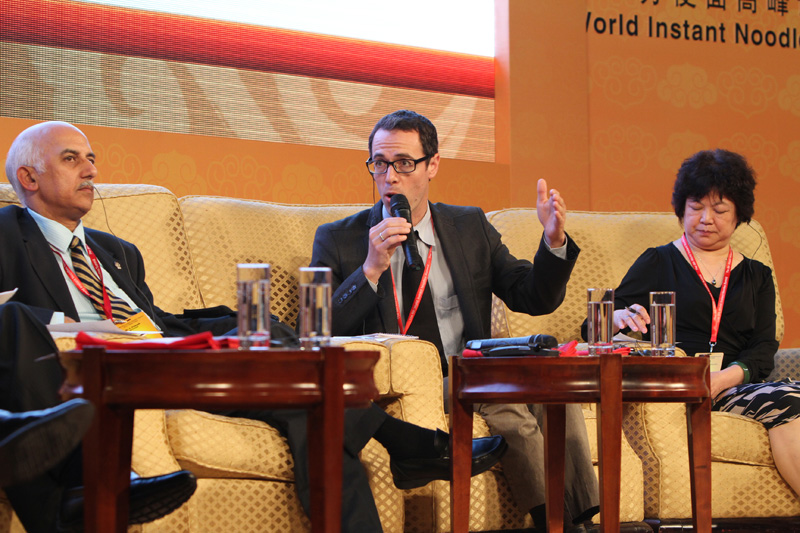 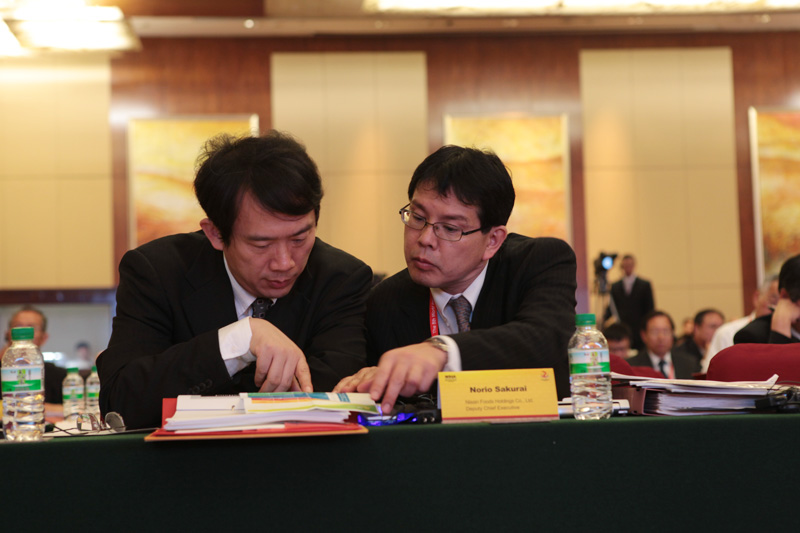 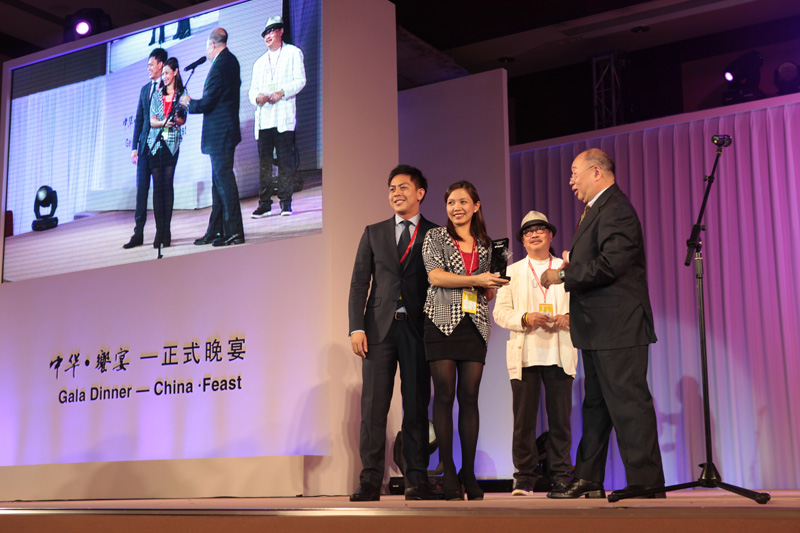 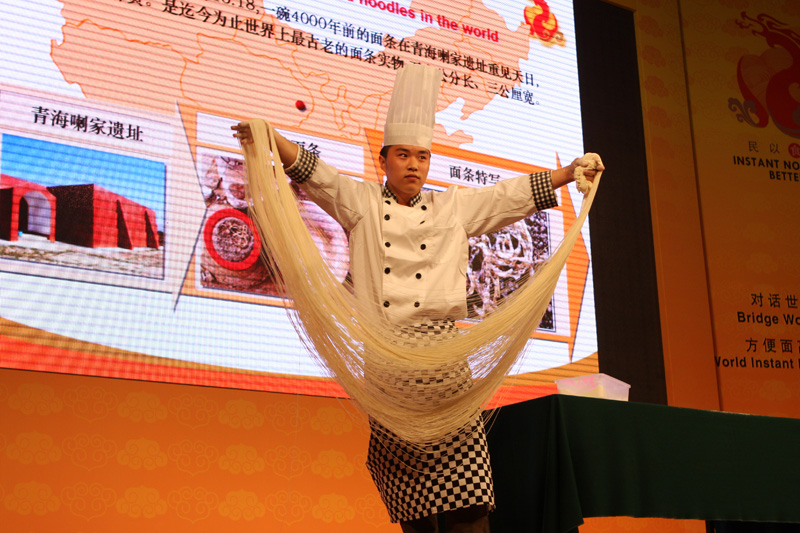 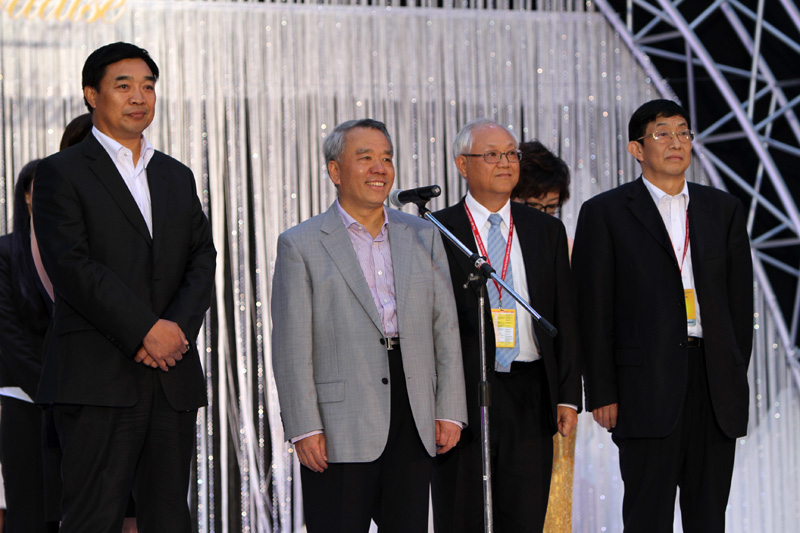 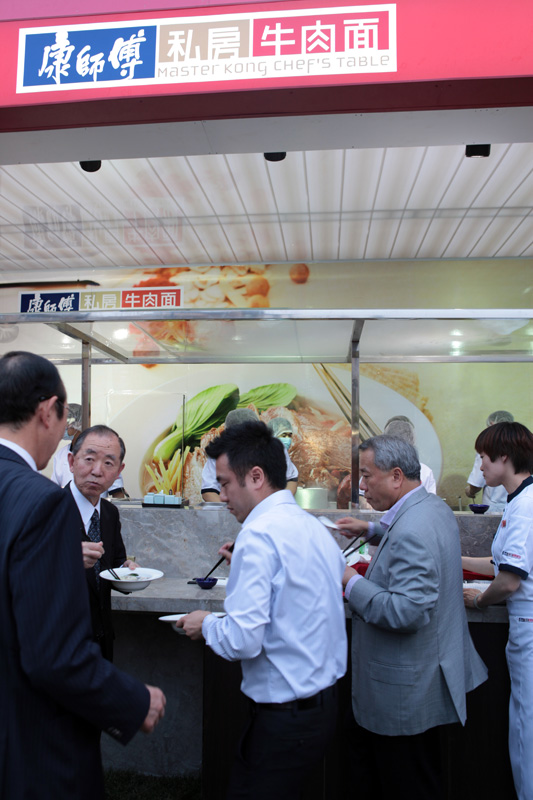 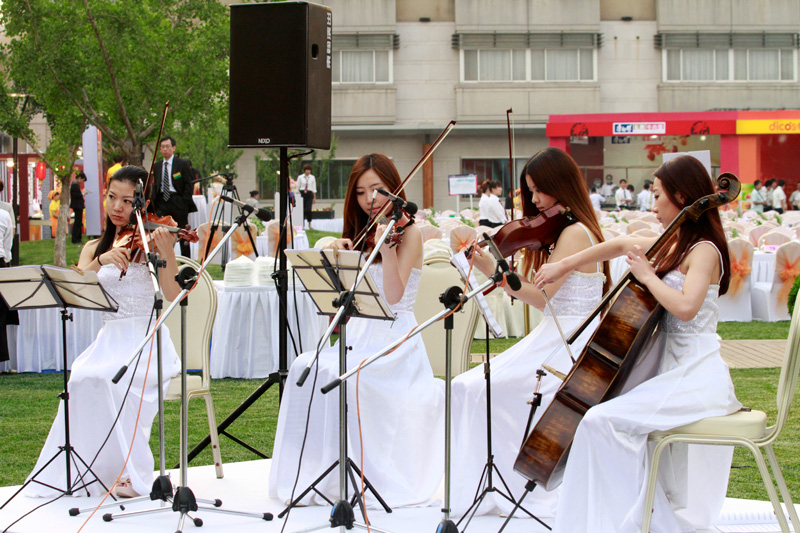 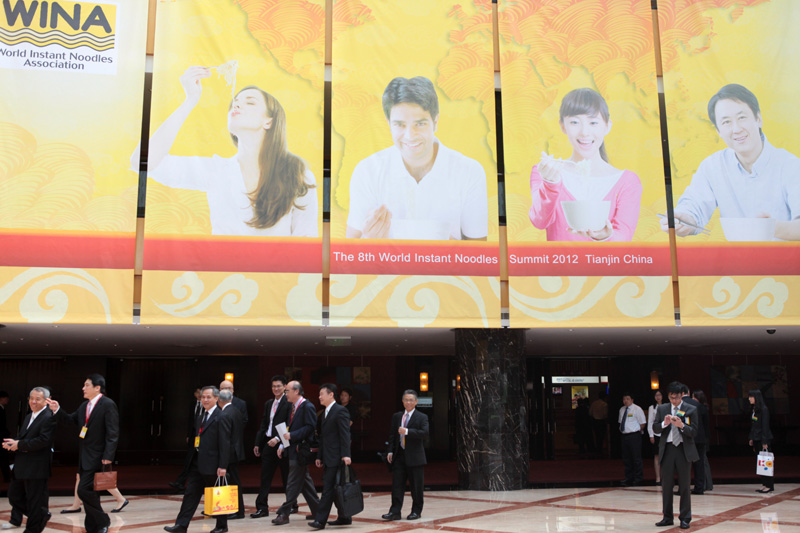 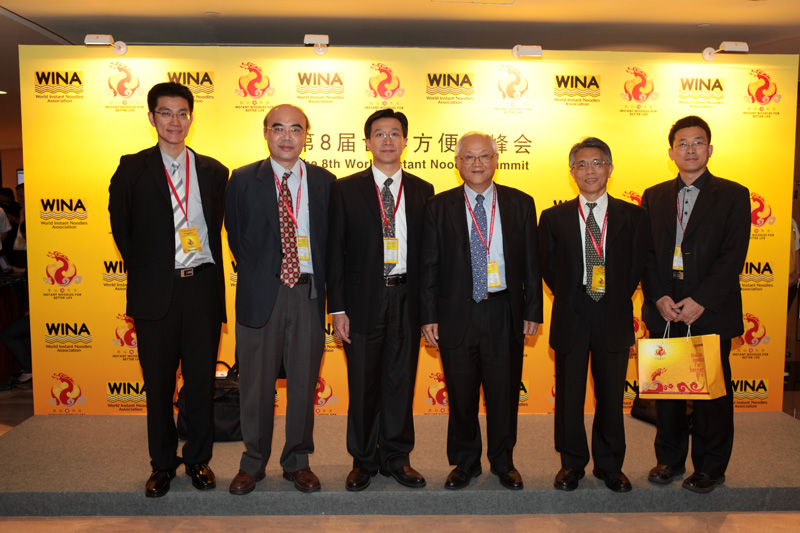 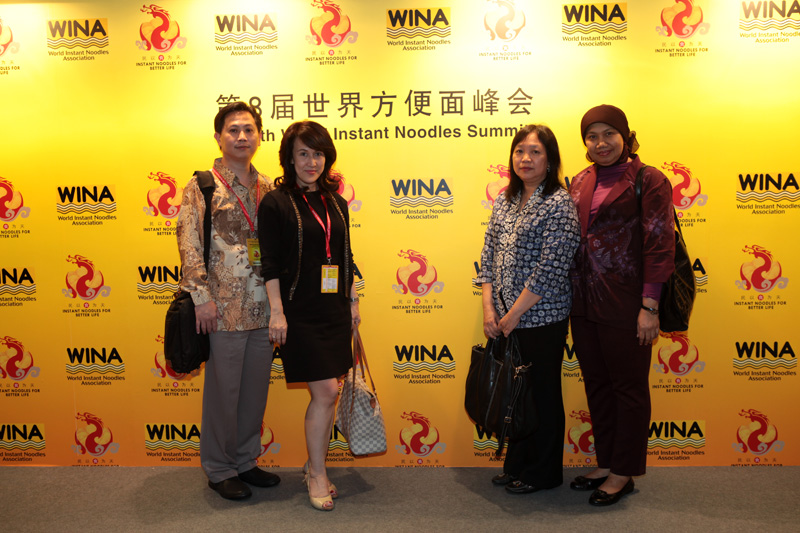 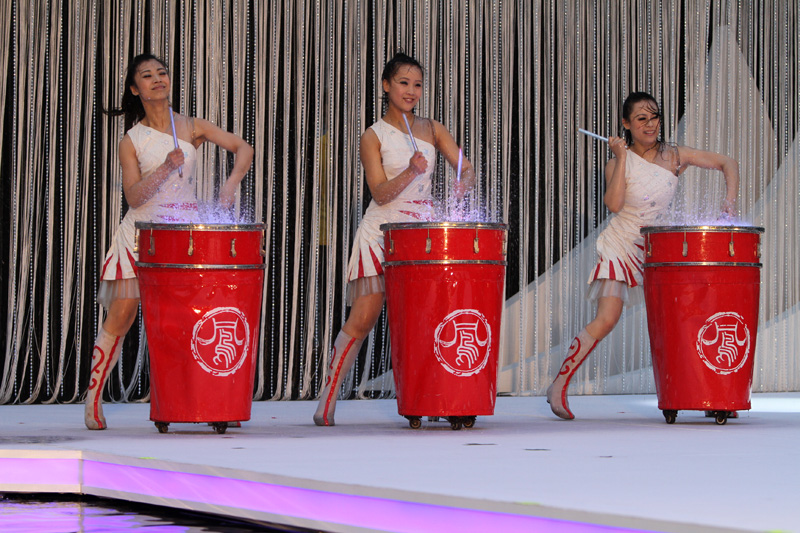 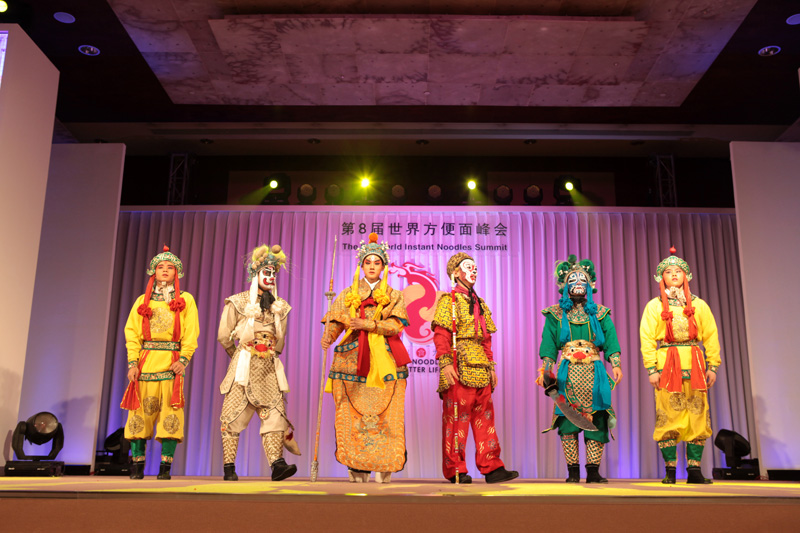 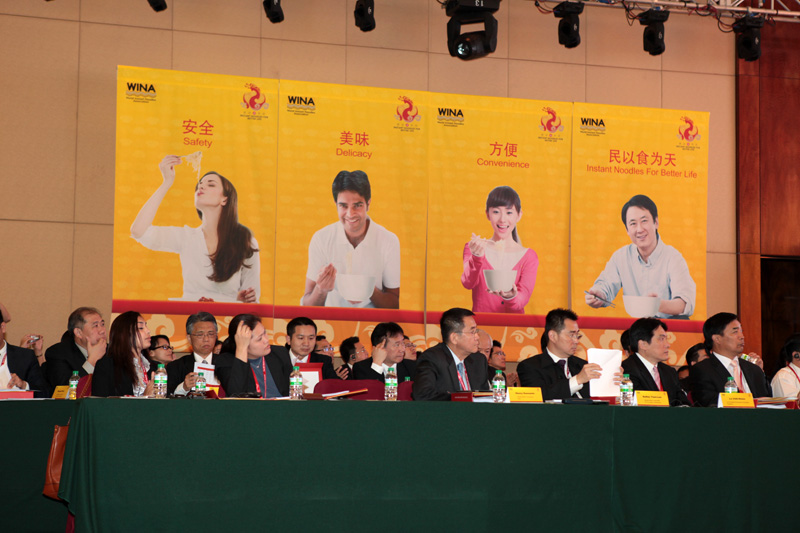 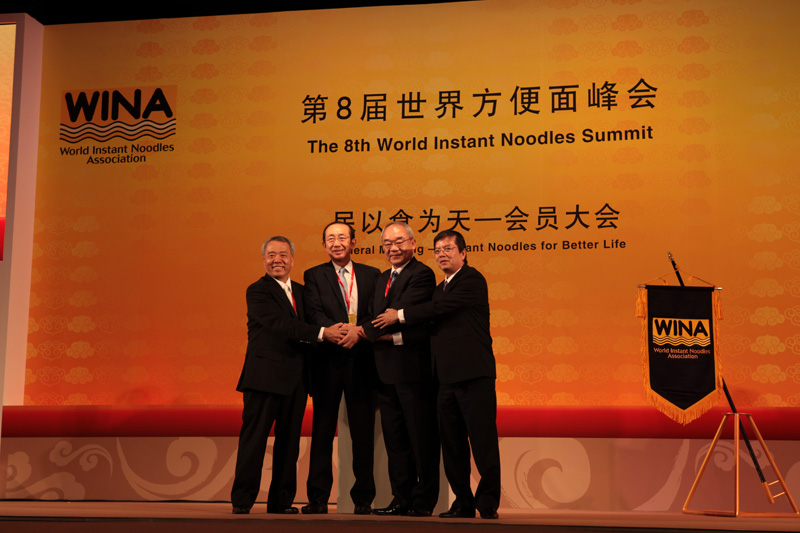 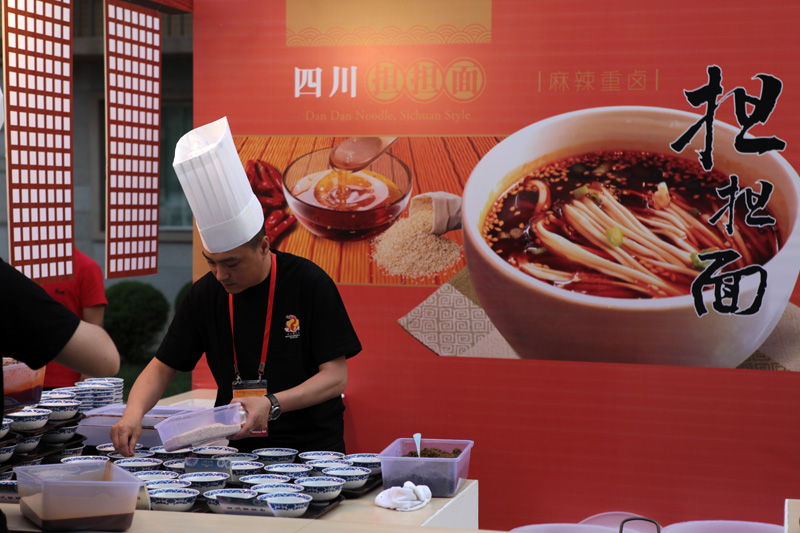 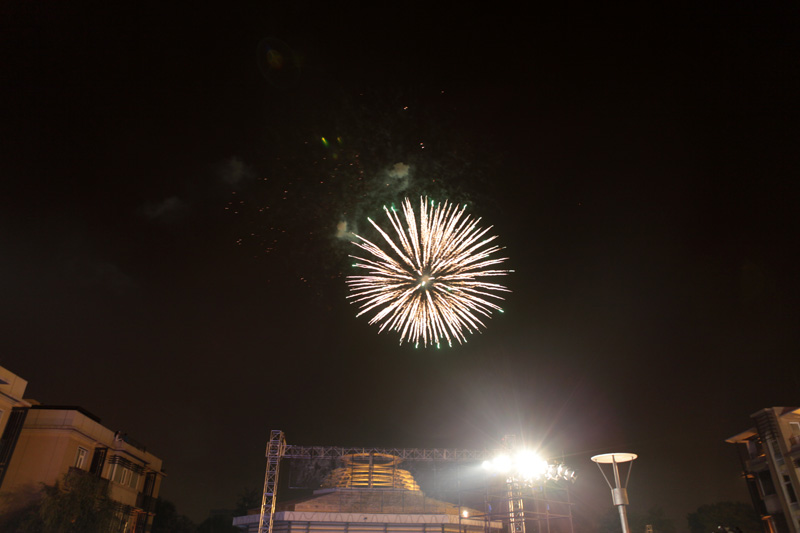 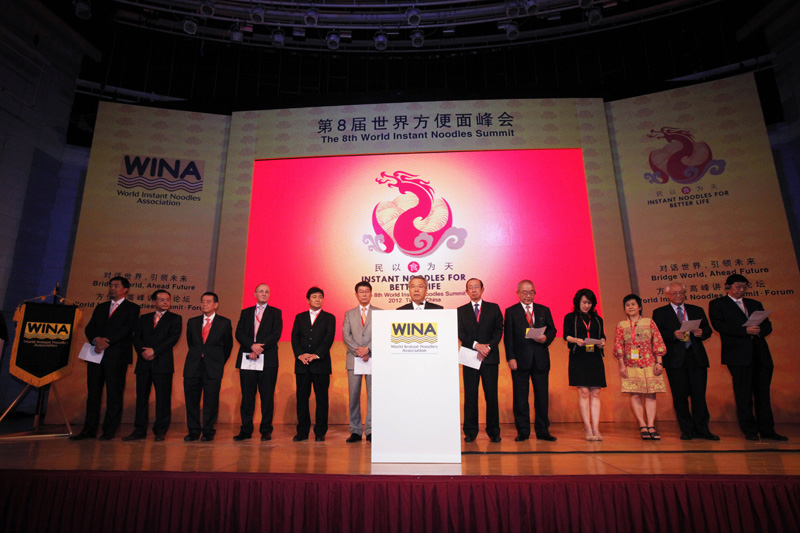